In July 1999, Mrs. Nicole St-Jean of the Canadian Association of Friedreich’s Ataxia asked me for an article concerning hearing problems related to this disease. The presence of hearing problems in persons afflicted with Friedreich’s ataxia is misunderstood. One knows better the dominant symptoms leading to the diagnosis such as ataxia, muscular weakness, incoordination, dysarthria, a profound loss of sensitivity, etc. The presence of a hearing deficit constitutes a more rare symptom although it is equally the source of numerous functional limitations.

We have done research on the Web in the data bank Pub Med medline.query to establish that articles pertaining to the issue of auditory problems in persons afflicted with Friedreich’s ataxia are not legion. Furthermore, the articles listed often date from before 1985 which already brings back 15 years. Considering the progress realized since then in the field of scientific knowledge related to the auditory system, it goes without saying that it only whets our appetite. Nevertheless this article is meant to be a résumé of the information which is the most valid in our eyes.

No precise data has been brought about concerning the prevalence of hearing problems in persons suffering from Friedreich’s ataxia. Andermann and coll. (1978) state the presence of a neural deafness in 5.2% of the subjects in their study. Sjögren’s study (1943) cited by Shanon and coll. (1981) estimates the prevalence of auditory problems at 10% in persons afflicted with Friedreich’s ataxia. The assessment techniques used by these researchers is not stated.

In Ell and coll. (1984)’s study, the hearing of 10 ataxic patients not related to any subjective hearing problem, it was proved than in the audiogram only one among them had normal hearing in both ears! Furthermore, 7 of the same subjects were subjected to an assessment of their potential as to the cerebellar trunk and only one was proved normal. Amantini and coll.’s research in 1984 was on 9 patients afflicted with Friedreich’s ataxia: there again, none complained of deafness. Two of these presented an audiogram showing a neurosensorial deafness. All the subjects however demonstrated difficulties to identify speech with distortions of speech of which the temporal “pattern” had been artificially constricted. Taylor and coll. (1982) studied 16 subjects: two of these presented an abnormal audiogram. However electrophysiological proofs demonstrated abnormalities in all the subjects except the one in whom the duration of the disease was the least.

According to more recent studies using more advanced assessment tools such as electrophysiological proofs, numerous abnormalities are detected during the assessments of the auditory function while the vast majority of these patients do not complain of any subjective deafness. It is very possible that the electrophysiological indicators of affliction precede by far the appearance of perceptible symptoms by the person himself. Also, one must not forget that deafness is possibly underestimated because the researchers did not necessarily perform the most sensitive tests (for example, tests of understanding of speech in the midst of noise) and that the subjects and their entourage were maybe not questioned in a sufficiently astute manner. For example, the person may function very well in general but experience difficulties in receptive communication when he is confronted with a noisy environment. One knows very well that in the general population, people rarely admit the presence of a hearing deficit because of the social stigma which is attached to it. It is sometimes the person’s entourage who more remark the difficulties in receptive communication of the afflicted person. The denial of a hearing problem by the afflicted persons contributes to its being misunderstood by the scientific community and slows down by the very fact research for solutions to bring them help.

The type of deafness

In the general population, the majority of persons afflicted with deafness present what is called in audiological jargon “neurosensorial affliction of peripheral origin”. The cochlea is most often the cause. (see the small diagram) In the case of persons afflicted with Friedreich’s ataxia, the affliction would be of a more central origin. It would be the auditory tracts which leave the cochlea, their relays and the cortex which are afflicted. The cochlea in itself would be essentially normal from which come the presence of an audiogram in the shape of a dome where the application is more marked on the very low and the very high frequencies with a good preservation of the central frequencies controlling the spectrum of speech. Nonetheless, it must also be mentioned that ataxic persons presenting an auditory affliction do not necessarily form a homogenous group from which comes the danger of speaking of an “atypical affliction”. 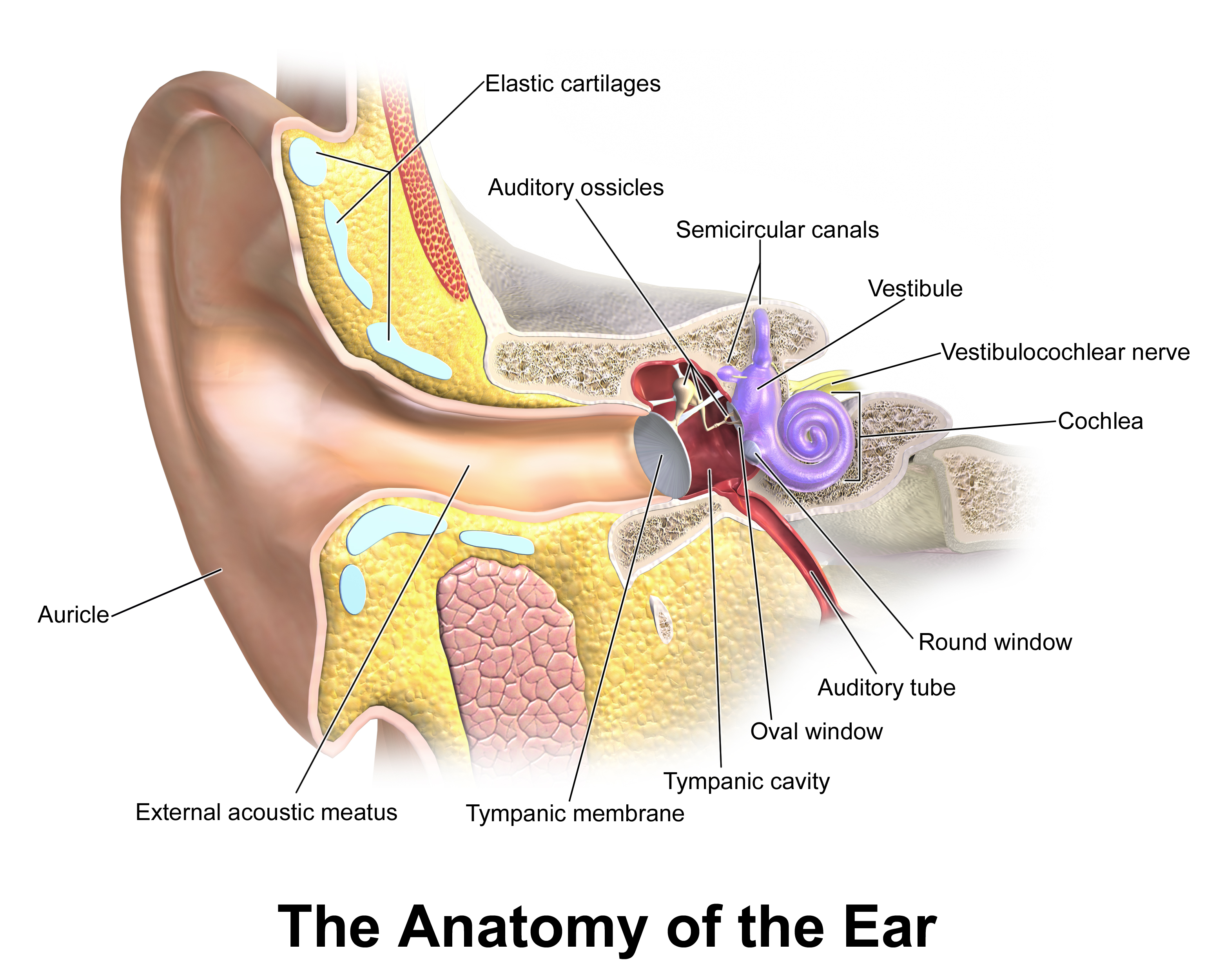 Just as in Friedreich’s ataxia, the deafness which can be associated with it is of an evolutionary nature. No medical or surgical treatment is possible. The deafness takes hold in an insidious manner and this is probably why the afflicted person is late in noticing it. It must be understood that this affliction, because it first touches on the centre of hearing, presents manifestations which may be subtle: the person hears speech for his detection capabilities (abilities to identify the presence or the absence of sound or of speech) are preserved well enough. The problem is more on the level of decoding, that is to say the ability to clearly identify what is being said. It is a little as if the person faced a foreign language: he hears that someone is speaking to him but he does not succeed in deciphering what the person wants to say to him. This problem is more noticed in noise and in groups and in these situations conversations become more and more difficult. The person must make extra efforts in order to be able to take part in a conversation. Considering that ataxic persons are often in contact with health professionals (for diagnoses and rehabilitation), one can think of the impact that a noneffective communication can have in these contexts. Think for example of a medication which the dosage was poorly understood, instructions poorly heard, an appointment poorly noted.

What can we do?

If you suspect the presence of an affliction of hearing concerning yourself or concerning a person of your entourage, the first step consists of having the state of your hearing assessed by an oto-rhino-laryngologist doctor (ORL) who will refer the person to an audiologist. These consultations are generally held in private clinics or in hospital centres. In the cases of persons afflicted with Friedreich’s ataxia, certain less standard tests will perhaps be done to display an affliction of the central auditory system (ex: electrophysiological proofs). It is the responsibility of the afflicted person to describe well to the professional consulted the symptoms which he notices in his daily life.

Once the hearing problem is documented, one should think of offering the afflicted person means of improving his receptive communication abilities. This is what is called auditory readaptation. Auditory readaptation takes place in a hospital centre or, more often, in a readaptation centre. If his abilities of speech detection are well preserved, it is useless to provide the person with a hearing-aid. In fact, nothing will serve to amplify speech if the problem is situated more on the level of the ability to clearly identify words and sentences (“I hear but I don’t understand”). Then one must teach the person to exploit his vision to complete the deformed auditory message that he receives. Lip-reading has proven to be a natural and efficient means to compensate for a hearing loss. Certain elements of speech which are difficult to catch by hearing can be very easy to see on the lips of an interlocutor. On the other hand, recourse to certain communication strategies can greatly facilitate the task of the afflicted persons, as for example:

Given that communication implies at least two persons, auditory readaptation is also addressed to the entourage of the person afflicted by deafness. By being better informed of the nature of this affliction and its manifestations, the persons of the entourage will be better able to adapt new ways of doing things when the time comes to enter into contact with the individual afflicted by deafness. For example:

Auditory rehabilitation can also imply access to hearing-aids or certain assistive devices. Mention the technical devices which can improve communication in the midst of noise (one places a microphone near the mouth of the speaker) and the devices which give access to written information (such as sub-titles on television). The proposed solutions are of course adapted to each particular case according to the affliction, the reported functional limitations, the daily activities of the person and his priorities. In the case of persons afflicted with Friedreich’s ataxia, one must also consider the functional limitations in other fields in order that the proposed means can be integrated with realism. Of course, the person is a participatory party of the step, and it is up to him to decide if he wants to use these new means or not.

L’Institut Raymond-Dewar is a readaptation centre specializing in deafness and in communication. It offers services to hard-of-hearing and deaf persons of all ages. In each team there are audiologists, speech therapists, psychologists, social workers, psychoeducators, and educators.

Persons afflicted with Friedreich’s ataxia as clientele is relatively new for us. This population brings us challenges which we are ready to overcome. We suspect that a good number of persons afflicted with ataxia have a hearing problem and do not consult us simply because they have the feeling that nothing can be done to improve this condition. Some may be resigned to it by considering that the affliction of hearing loss is just one more manifestation of Friedreich’s ataxia and that one must “endure his fate”. If the afflicted persons manifest themselves more, it becomes easier to develop a more advanced expertise and innovative and adapted approaches. Also, it would perhaps be pertinent to make the professionals who work with persons afflicted with Friedreich’s ataxia aware of this in order that they adopt adapted strategies of communication.

This article does not have the pretence of drawing up a complete portrait of the problematic regarding hearing problems in persons suffering from Friedreich’s ataxia. As we mention above, we do not have a precise idea of the number of individuals afflicted but considering the negative impact that deafness in a person already handicapped on other levels can have, we believe that it is important to mention that this problem exists, it is very probably more frequent than we think, and that we can help the afflicted persons.